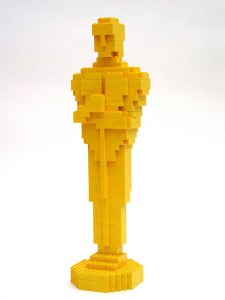 And the Oscar for Best Animated Feature goes to… uh, wait, where is Lego Movie? My favorite movie of 2014 (not just animated category) wasn’t even nominated for the Oscar. How is that possible? I could see another winner (Big Hero 6 was great), but how was the movie snubbed a nomination?

For me, the Lego Movie lived up to the title song. Lots of laughs, but also profound. I used clips as illustrations in a sermon. I drug folks to see it, with the epic claims. While Hollywood tried to make a buck off Christian films, this was the most spiritual movie of the year. Certainly not perfect theology. But redemption. Calling. A push against consumerism and cookie cutters** toward community and sacrifice.

Even if you did not see everything I saw, how could you not love Batman. The Best Batman ever…

Obviously not everyone saw the same movie I watched. Not everyone sees life as I do. The same moment interpreted differently. The world is full of Emmets and Batmans (not to mention Lord Business, Cat Lady, Wyldstyle, Wonderwoman, and Abraham Lincoln). Which means sometimes awesome things are left in darkness.

Yet, this diversity is part of God’s design. Rather than a reason for walls and protection, it should be reason to learn. To discover what others see. To teach what you have found. And in this moment it becomes an excuse to watch a few more movies. After all, my family has not seen all of the nominations. Grab some junior mints, pop popcorn, and watch movies…  awesome.

** “cookie cutters” – Religion has been accused of producing cookie cutter followers. But this is not God’s design. The creator of this world, this universe, loves diversity. Look around, every snowflake is different. Even in scripture there is a sense of diversity of belief. Far from systematic, the book is the story of salvation. Often literal narrative. It does disagree with itself.  And the answer is rarely “either/or”. Instead “and” becomes central to theology. God and Neighbor. Grace and Works. Why? Because God is not as concerned with theology as relationship. This is where the story does not deviate – God set out to make right relationships. Between Himself and this world. Between the creatures themselves. We are not all to be the same, but we love the variety.