Covid19 has us stuck at home preparing for Easter… but we can mark each day with devotion. Click here if you missed a past day’s reading. 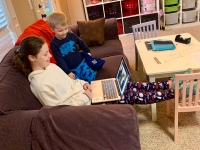 Yesterday was the first day of Covid19 homeschooling. All of the elementary teachers connected over Zoom (virtual conference calls, where you can see everyone else). Lots of stumbling and bumbling – laughter as everyone figured out the technology together. All of the teachers were encouraging. And welcoming of Mr E (this day was a bit of “bring your brother to school day”).

But Darcy’s Zoom with Mrs. Bonham lasted a full hour. Mrs. Bonham discovered how to mute all of the kids, and she took advantage of this feature. But not with talking, instead, she went student to student giving them a chance to share. With each report she would respond with encouragement. You are wonderfully made, she seemed to say!

This captures so much of what God knows to be true. Even in this broken world, we still bear the image of God. The image that is truly Good. And it is this that God relishes to bring forth. He is so much less concerned with our stuff. Or with our past. Or our status. God desires to bring forth our Good purpose! This quote defines this passage for me:

“That means render the image of Caesar, which is on the coin, to Caesar, and the image of God, which is imprinted on the person, to God. You give to Caesar your money. But to God, give yourself.” — Tertullian (155-240AD)

Deeper:  The Jews took the 10 commandments seriously. The third command, “You shall not take the Lord’s name in vain”, was not about avoiding using god as a curse word (which is the modern Christian take). They avoided using the proper name of God, Yahweh, for fear that they would not give God the respect God deserves (which would be taking it in vain). They would not even write it  when copying the scriptures (they created the word Jehovah in OT manuscripts by combining Hebrew consonants of Yahweh with the vowel of Adonai – Lord).

And they were just as serious when it came to the second command, “You shall not make for yourself an image…” (Exodus 20:4). Money then, as today, bore the image of rulers. Roman rulers who claimed the status of God. So coins were considered mini idols. The temple tax could not be paid with a Roman coin (one reason for the money changers). And a strict Jew would not carry Roman coins.

Which brings out the hypocrisy of those who were questioning Jesus. Jesus didn’t have a coin… they held the idols.

I don’t touch on the second part of this passage, Mark 12:18-27, because I do not like it. I love being married to Megan and would gladly stay married into eternity. And cannot imagine a perfect existence without that relationship. But I do know to trust God… I just don’t think about this passage much.