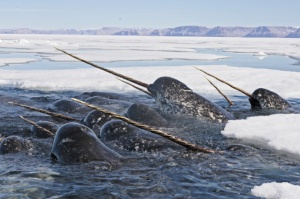 The horn of the elusive unicorn was worth many times more than its weight in gold. In the sixteen hundreds Queen Elizabeth received one valued at 10,000 pounds, the cost of a castle! Part of this value came from the belief the horn had magic powers to protect and heal. A cup made from the bone would purify any poison slipped into the drink… Of course the unicorn does not exist, but the horns sold and bought were real. Coming from an even more unlikely creature than a unicorn, the narwhal. Living in the frigid waters of the arctic ocean this whale has a horn protruding from its head. Even today scientist debate the use of the horn, which can grow up to nine feet long (for one possibility click here).

Sometimes the truth is harder to swallow than fiction. If you were to tell me to choose which is more likely a unicorn (minus the healing powers) or a narwhal… I would choose the horse with a horn. Why would an arctic whale have a horn? Fencing? Deer have antlers, why not a horse? I imagine this is the reaction of the people when Jesus said in John, “before Abraham, I am”. Which was the very name God called Himself… this man being crazy seemed much more likely than him being God!