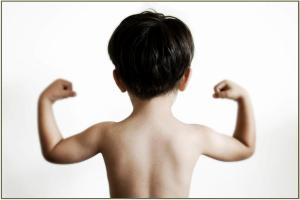 The interesting thing about the story of Samson is the Philistines were constantly trying to figure out the source of his strength. So he probably was not ripped beyond belief—early Arnold style (I say early, because the new California commercials, “you’ll be back”, have him looking like someone I could take… well, most people could take him). So set aside your children’s Bible pictures, because if Samson was built like Goliath no one would question his strength.

The new perspective I have of Samson—with average guy build—changes everything. Imagine Dwight (or even me) ripping gates from their hinges or being able to take Arnold. That would be  an exciting gift from God…

And this perspective casts even more darkness onto the story. How could someone abuse such a gift? How could he become so selfish?

As the intro said, perspective is everything. We all have different skills and talents, but we use our gifts for different results. This difference often comes down to focus. Some focus on OUR gifts—others focuses on our GIFTS. This change of perspective may seem minor, but it is the difference between what will support and what comes crashing down!

For Samson, God’s blessing became HIS gifts and everything he did was selfishly motivated. Overtime Samson’s world came crashing down (literally at the end). In the same way, if we take God’s blessing and use them only for ourselves we will find the power of blessing fail… while we are not abandoned by God, we can no longer accomplish His works.

But if we treat the blessings of God as our GIFTS and use them to further the kingdom. Then we will become more powerful than Samson ever dreamed. As Jesus reports, “I tell you the truth, anyone who has faith in me will do what I have been doing. He will do even greater things than these, because I am going to the Father.” (Jn 14:12)

Which is a truth harder to believe than me being able to take out Arnold! But this is our strength. In the grace of Christ our gifts can do the impossible – because raises up to live new life!