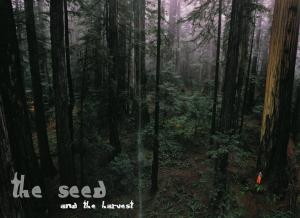 My National Geographic came in the mail this week and the cover story was on the Redwoods in California. I have tall pine trees in my yard (7 in the 75 foot range), but my trees are just babies compared to the mammoth redwoods. The tallest topping 370 feet! Of course even these trees still begin as seeds… (random, notice the dots in the picture to the right… yeah, people)

In my back yard, Ivy found red seeds that she  first thought was candy (the skittles cloud had finally come). Of course we stopped her and told her they were beans. To which she got excited and said they were her magic beans. So now we are going to plant them and soon we will have a beanstalk in our backyard, just like Jack. (I did not know what beans they were, but Kim informed me they are Magnolia seeds. So, while it will take a long time, these will grow up into the sky!)

This semester our group at Plunge has been kind of rambling, not really focused and I have been wondering why. But the answer is obvious, we have not had leaders step forward. Last year we had multiple leaders rise up, but so far this year no one has arisen. This leaves with a void. Not a leadership void, people always lead. But a void of good leadership.

In Mark the farmer scatters the seed almost randomly. Of course broadcast is a type of planting, but Jesus is not teaching farming technique. Instead he is speaking of his own message. It goes out to the people – to all people – and what they do to it determines if they are good soil or rocky ground or… and I read over this I could not help but think how I often offer the seed to those like me (since I am the archetype of good soil!), but do not seriously offer to others. Of course I offer, but I rarely expect them to recieve it and my own judgments must taint the process!

On leadership in the church, we often focus certain type of leaders. The pretty, the rich, the talented become our leaders – why? Because they are the popular choice of the world. But in the Kingdom of God leadership is determined by faithfulness. I can remember being a middle school student and though I came to most everything, my youth pastor did not know my name (which troubled me to no end). I was neither cool, nor nerdy, I was quite literally invisible. And yet, in those moments I was seeking Christ. I was attempting to proclaim his message. And I found myself – quite startlingly, since I used the world’s lens for my self worth – as a leader.

Our group is desperate for someone to step out on faith. To not be driven by what others will say. To not hesitate because you are not cool or popular. Instead, to faithfully receive the message and faithfully put it into action. In this God will raise up leaders. And through those leaders He will transform our group from misfits into His disciples!

A couple of random thoughts: