“His [Jesus] appearance in our midst has made it undeniably clear that changing the human heart and changing human society are not separate tasks, but are as interconnected as the two beams of the cross.” ~ Henri Nouwen, The Wounded Healer

I have been to only one real concert and for the experience joined in the mash pit (It was POD and a unknown Linkin Park opened). Now I am not a big guy, but then, with running (and less eating) I was tiny. So in rag doll fashion I was tossed around in the pit and at one point I went down flat on the floor—which is a crazy place with everyone jumping wildly. But right as I hit the floor a hand grabbed my shirt and a huge guy lifted me off the floor. Holding me in the air with one arm, he shouted, “be careful”… Not that he saved my life, still, in that moment I kind of saw this guy as a guardian angel. But later, as we left the concert, I saw the same guy and I thought about thanking him—that is until he started to pound someone for looking at his girl (pulverizing may be a better description)!

We live a dual existence. One moment we act holy and graciously serve those around us. In the next moment we are sinful and disgustingly force our will on others. Yet, in the church we like to pretend there is only one reality inside our heart. While we openly condemn the filth of the world, we pretend our own heart does not share the darkness! 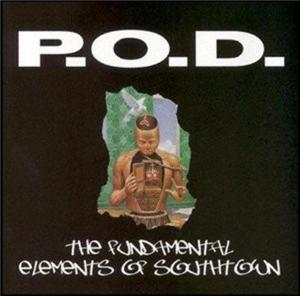 Before I knew of the band POD I saw their CD and feel in love with the cover art. It was an abstract picture of the redeemed, with some images I could understand and others which left my imagination spinning. Yet, when I went to the Christian bookstore to buy the CD I found a totally different cover. Only the center of the art remained, the rest was blacked over to blot out anything that might offend! Maybe it was the cigar or the chained monkey or the dog in the suit… Of course I was not about to be chained, so I left the store for Best Buy!

In fear we seek to protect the ourselves and we build up walls around the church so that sin will not invade. Of course we miss reality, because we are the ones who carry the sin inside. Beneath our unblemished masks lives the darkness that Christ longs to redeem…

Jesus did not come to cover us up with masks. Instead he came to begin a new life that would bubble up from inside. A righteousness that would not be overcome by sin. Instead, as light fills a dark room, the works of Christ will convert a chaotic world. So as the church, we should not fear redemption, but embrace the reality that we are broken and new. Sinful and Holy! And so we enter the world, not to condemn, but proclaim that God has come to save those like us. To save the broken, the hurting, the mean, the greedy, the selfish… To proclaim God has come, not to deny who we are, but to embrace us as His children! And in the embrace to make us new!