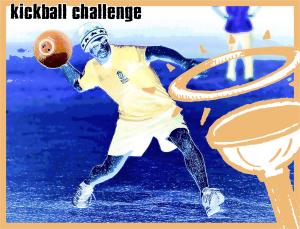 “Hey high school students, the middle school would like to officially challenge you to a game of kickball three Wednesdays from tonight (may nineteenth). To show how much we respect you we bring a gift of flowers…we thought pansies would be perfect.”

On Wednesday we took our challenge to High School students. It was meet with laughs and promises to bring of black eyed susans…  Afterward we let Andy take the flowers home, but I need to confess the flowers were not really pansies. I went to three places on Wednesday looking for the flowers. The first admitted that theirs had died (always a good advertisement!), but the second told me I was crazy to try and buy pansies this late in the season, “they will all be dead in few weeks.” Hence the slang definition of pansies, wilting under the heat. I went to Wal-Mart last, imagining they did not know this truth. But in the end I just chose some flowers that could look like pansies. Of course I had little idea what the flowers should look like, but it did not matter—because none of you had any idea either!

I told the Plunge group this on Wednesday and they were startled I would lie… but it was a great illustration. If you do not know what you are talking about you can be easily confused. It may not matter with flowers (really it helped the joke), but what about this moment? We gather weekly for church—but do we really know how church should look? I wonder, are we totally confused? …

“Whenever I see the rainbow in the sky, I will see and remember the everlasting covenant between God and all living creatures…” ~ Genesis 9:16

Ivy has begun to exert her little will on our house and it has lead to some epic battles… I can not imagine where she all her stubbornness comes from… This past week one night was just depressing—as a parent I often wonder how to raise our girls and how I must at this moment be ruining them. Then as I looked out the window I saw in the sky an amazing rainbow (the picture does little justice, I hope you also had the chance to see it live).

I quickly called the girls. So Ivy and I went out into the light rain and danced beneath the rainbow. I can not explain how healing, how redemptive, it was under the rainbow. I imagine I got a small picture of how Noah felt… and it reminded me again that we are not in this alone. The promises of God are still true. So while Meg and I will falter as parents—our prayers are not so much about us becoming perfect parents, but that God will again be gracious. After all, Ivy and Phoebe are His children more than they are our children. And He is the perfect parent.