We continue in the Aftermath of Easter. Christ has risen. It is the earth shattering event (our greatest fear, death-the consequence of sin, has been defeated), but it is an event no one knows about… and the church, the followers of Christ, have been sent to report the good news. To bring light into a dark world… 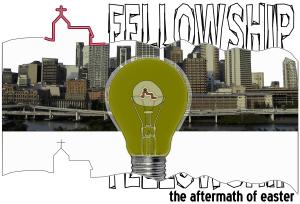 After a crusty day, with Ivy again throwing a cranky fit* and phones calls about church issues, that followed a  home repair, where a few hundred dollar floor project became a few thousand dollar project… I sat down at the computer to put together something for Megan. As I worked I was more than a little stressed, but Meg made cookies and it would all be better soon… As an aside, Mom would make cookies when the Chiefs were losing and I am now conditioned… When the buzzer rang, Megan asked me to get them out. So, I hopped up and fell right back down. To stand on my feet hurt and as I looked at them they were swollen to an incredible size. I tried to get back up, but they hurt too much and I was convinced if too much pressure was applied… pop! Totinos pizza roll style, they would burst open –  pouring out whatever goodness was filling them up!

*The determination of a four-year old is amazing. Not that I was going to break, but man, our kids can push us to the limits of sanity… at least mine can, of course I am not sure how far I am from sanity’s limit on a normal day!

Over time, the swelling went down, but I still sent an email to the doctor. In his reply he simply wrote that I needed to come in for a visit. Up to this point I was not super worried, but now… well I started to think about what could be the problem. I assumed I was dying from stress – I suppose Ivy was killing me!  And that night I awoke repeatedly. Each time I would wiggle my toes to make sure everything worked.** In the morning, my feet were swore, but not swollen.

At the doctor’s he did multiple things, including using a tuning fork (which my voice would have failed, but my feet passed!). And then he sat me up and said that it was classic allergic reaction. He asked about food from the night (Megan had made a new dish, which I ate left overs for lunch… brilliant!), plus I has also taken Tylenol from 2006 (though this was probably not the issue)… all to say, I was not dying.

**Once I awoke from a dream where we missed our plane and had to get on another. Meg pulled the door close and we sat down for take off. As we lifted off I realized that we were the only ones on board (hence Meg pulled the door closed). The empty plane did not trouble me, autopilot would get us there. But as I looked around the place was filled with McDonald’s bags and I realized they did not clean up this place. Which meant they also had not yet refueled the plane and we would crash… I think the plane crash was more Lost related than foot related. Still, I shared this with the students on Wednesday and Matthew responded, “I don’t know what you were worried about. With those feet you would have just bounced when you hit the ground!”

It is funny how much I thought about myself over those twenty four hours. I was self consumed over nothing. Of course I am not alone – we get most excited or depressed about our own events. Which makes the early church all that more amazing.

For me fellowship brings images of food and friends – hang out time. But when the scripture breaks down fellowship in the early church this is what it says, “44All the believers were together and had everything in common. 45Selling their possessions and goods, they gave to anyone as he had need.”

Fellowship was not just friendliness, instead they carried each other’s burdens. They move beyond a tithe and took radical steps. Someone had need, so another would sell possessions or land or … These acts were not 10%. Which is difficult. But with my 10%, life stays pretty much the same. I still have all of my things and can still buy more (even if it takes a little longer).

But the earlier church gave away their possessions. Things they may not ever get back. What I mean is that the church of Acts, in the Aftermath of the Resurrection, was even willing to lower standards of living! They were to sacrifice anything for the sake of the community, for the church.

To be honest, this is wild. And I wonder, do I have the faith? Sure I have given much for the Kingdom. But what about my car? Would I sell it for another in the church – knowing that we could not afford to just go out and buy a car…

The early church lived radically and God blessed them radically. Angels rescued them from jail or a person’s shadow could heal the sick and lame… even more the passage ends with, “the Lord added to their number daily those who were being saved.”

My God give us the faith of the early church!