It is funny how we land right back where we start. We make plans to change, but when the moment arrives we find ourselves acting the same as always. We imagined ourselves doing better, no longer getting angry or joining in the gossip or lusting after the girl or … (add your own temptation)… but we falter and our action become exactly the opposite of what we hoped. We try to justify; maybe we resisted for a second or maybe it wasn’t that bad—but really we are just four houses down on the same street.

At the staff vs church softball game I gave my wedding ring to Megan. Who better to take care of it, while I proved my athletic ability… The next day we found out Ivy, who still sucks her thumb while sleeping, is destroying her teeth and needs to see a specialist—at age four! This lead me to cancel our cable and internet. We had been talking about it for awhile, but the thought of specialist bills put me over the edge. Of course our TV can not receive signal without a digital converter, but thinking ahead I bought one long ago to get the government discount. So I hooked everything up and got a no signal error (getting out the book, this message meant the box was not getting a signal from the antenna). I realized our antenna coaxial cable was worn right at the end, so I spliced it and reconnected. But still the same no signal error. At this point I decided I may not have any splicing skills, so off to Wal-Mart and a new antenna… But first I needed to get my ring back from Megan. She told me she had left it in the stroller—which I had thrown quickly into the car since it was raining after the game! This lead to frantic search of the trunk, then the church parking lot… When I returned I had a new antenna, but no wedding ring. So, depressed, I hooked up the television and turned it on only to see no signal.

A perfect person would not have been troubled, but I was irritated and mopped in front of the no signal TV. My effort to save a little money would now cost more—not to mention the specialist or the wedding ring. And my irritation spread, soon Ivy and Meg were cranky. Only little Phoebe was unaffected, thinking it was probably a good day, since mom was getting out the ice cream carton… 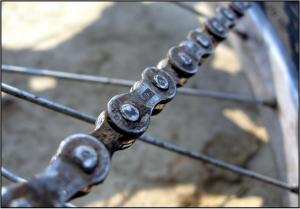 A chain of events draw us into a cycle and we land in the place we do not want to be—as the person we do not want to be. The freedom to break the cycle is not possible with good intentions or imagining another way—instead we must be made new. Grace moves from the inside out. So, when you find yourselves in the same place (maybe different house, but the same street), there is no point in guilt. Instead, go to Christ. Meet with Him, pray to Him, read about Him. And in this relationship you will find the cycle is broken and you are becoming who you imagined. What He saw already inside!