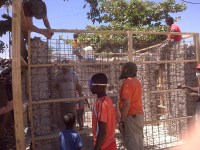 Against the power of a 7.o magnitude earthquake poorly built Haitian concrete buildings literally crumbled. Today, two years later, the land is still devastated. Piles of rubble mark the land. Yet, amid the destruction, there are mission trips taking place to rebuild. New homes are literally being built with walls made of rubble.  Chicken wire and rebar framed walls are built. Then lines of volunteers bring wheel barrows of broken building’s remains. Buckets are filled with the crumbled pieces and poured into the wall frames. A thin concrete layer covers and smooths the wall. A roof is installed. Then a Haitian moves from a tent city into a house. Into a home…

I can not think of any better example of what God does in our midst. The broken remains of the salvation humanity has tried to provide surrounds us. But into our crumbling lives. Into our broken hope. A man is at work – “raising the dead in the graveyard.”

This past week I was invited to take the church on a mission trip. A challenge to not just preach moving beyond our walls, but to actually go out on mission! In the Spring of next year we could take a trip to Haiti. To minister, to love, to rebuild. The trip will cost between 1500 and 2000 dollars. If anyone is interested – let me know.  I would love to lead a trip there!

“Who would have thought it, but life is finding a way through this waste of cynics, concrete, and pain. Theres a man down between the Saturday cartoons and the dirty magazines*. He’s raising the dead in the graveyard, where we’ve laid down our dreams and His name is hope.” ~ John Mark McMillian

* Please do not be offended by this quote. He is capturing human fantasy. As children we dream of cartoons. As adults – at least men – lust is a dangerous temptation. In so many ways we ponder our version of a better life and miss the man who is raising the dead in the graveyard… we miss Hope.