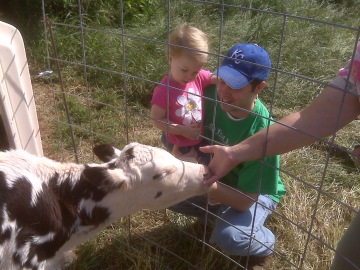 Greg, my pastor in Augusta, grew up on a dairy farm. So for staff retreat one year we made a stop at his dad’s farm. We were able to milk cows. And while we were there his dad was in the middle of an artificial insemination.

Let me step back. The farm world is high-tech. Which means a bull’s role has changed significantly. And on this farm, amidst the dirt, the mess, the smells was a room with  several steal containers. More movie like than farm, Greg’s dad opened the containers and revealed vials frozen in liquid nitrogen. Each vial held the semen of a particular bull, one who genetics would increase milk production. Vials the farmer buys based on stats that vary the cost.

So, there we stood, watching, as the farmer feed the line into the cow. He had to hold this in place, so a second person had to inject the vial’s plunger. He asked for volunteers and I stepped forward (or did everyone else step back?).

A few months and a pink plus sign later, I was the proud expectant father… or something along that line. And soon enough a calf was delivered. In a few months Greg took my family out for a visit and photo above is of me, Ivy, and our calf.

Recently I asked Greg about our calf – now a cow. And this sent him into a rambling about milk cow lifespans and ended with him encouraging me not to mention any details to Ivy when at McDonalds…

Life is short. Not just that cows soon become steaks, but that our life-stages move so fast. And the normal – the routine – can quickly eat up all our time. But little risks – new experiences, words spoken (rather than just thought), projects paused for games – create memories. Some strange, some crazy, some good. But always more alive than the mundane.