When I was growing up we would play 20 Questions. Fairly simple premise, a person would think of something and the group would have 20 questions to figure it out. Almost always someone would ask, “Is it bigger than a bread box?” I suspect this question was handed down from an older generation. I had never seen a bread box. I did not know anyone who had a bread box. My bread lived happily in the store provided plastic bag. But I discovered it was a good query, so I started asking “Is it bigger…” even though I did not really understand the size of a bread box. 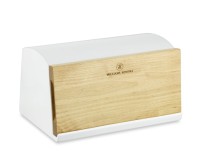 This thought came back to me when I saw a bread box for sale at Williams Sonoma (They started at $119 — which is a reason not to own one). I brought all this up to Meg. She responded by telling me about M.A.S.H., a game she played growing up. The title is an acronym: Mansion, Apartment, Shack, House. With a friend, you create lists of threes. People you might marry. Cars you might drive. The only set category is the future home. Then the friend draws a spiral. When told to stop the lines are counted. That number is used to count through the lists, eliminating options. Soon you have your future life’s story.

This palm reading was perfect for a house full of girl’s and soon they each started a list with Meg. It was all joy and laughter until Phoebe’s list landed on a shack and Darcy’s list landed on mansion. Tears, rage… We tried to tell her it was just a game. Being a corny pastor, I told her she could meet Jesus in The Shack, which lead to her storming upstairs… (Later Phoebe rewrote M.A.S.H. so “S” was “Seaside House”!)

I am definitely at a loss for what is going on inside my kids’ heads. But I often don’t understand my own motivations – for instance, why couldn’t I keep my mouth shut? Of course it doesn’t take me 20 questions to come up with answers about myself — but sometimes my self awareness doesn’t fit. It is like trying to describe a bread box. Who am I? (Or better, What is the matter with me?) I haven’t really touched on what is going on inside my heart.

This year my pastor’s group started studying the Enneagram. Specifically a book by Richard Rhor, The Enneagram: A Christian Perspective. While some compare it to a personality test, it isn’t the same as Myers Briggs. Instead it helps label the motivations behind our actions. And reading this book has changed my perspective on myself – helped me see deeper motivations in my life. It has opened my eye to understand others (rather than be irritated by our different approaches, I see their motivation).

And this is something  I want to share with the church. Our summer small group will be on Sunday afternoons. More details are coming, but if you are interested shoot an email: sean@chandlerbc.org I hope you’ll make this part of your future plans, whether M.A.S.H. indicated it or not.