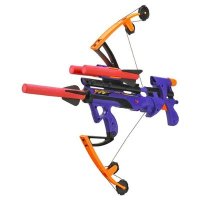 Ivy’s birthday is tomorrow. She will be five and in the fall starting Kindergarten. Something I am not entirely prepared for… Still, she is growing up. In part I can see this as her birthday gifts lists get longer and larger. She is beyond the toddler who does not understand asking for gifts (Phoebe would be content if we would please just honor her “cookie” request), but she is not to the point of realizing resources are limited. So she asks for everything. From electric cars to swing-sets to alarm clocks (how practical for the child who can not tell time) to barbies – really everything she saw in a recent Toy-R-Us catalog.

But one request that has me excited is for a real bow and arrow. For weeks she has been asking if I would build her one from sticks in the backyard. After all Robin Hood did, so surely dad can… But we finally convinced her that this was probably better as a birthday gift and so her Aunt has chosen the perfect Nerf weapon!

As to girls becoming archers, Ivy has always been excited about Pirates. But she would soon transform them into Pirate Princesses. And at the end of the battle there would be a glorious wedding – with a feast and dancing. So girls will be girls and boys will be boys. Some, like Ivy, strike a balance in-between, others, like Phoebe, never leave their baby doll at home.

This leads me to an article I just read in USA Today (click here). It is a comment on the recent purging of toy guns from our children. Mentioning the extreme, like a seven year old who was suspended from school for pointing his fingers at the wall like a gun. But it builds in all kinds of directions and then quotes Penny Holland,

toy gun play is often “part of timeless themes of struggle between good and evil.”

It can feel right, especially as Arizona congresswoman Gifford still recovers, to want to restrict guns on every level. Even to the point of taking away guns from children – even their right to shape their fingers.

But I played with guns and GI Joes a lot as a child. Pretend combat missions in the woods. Bombing missions with my micro machines. And I have not spun off on a violent rampage…

Too often our tendency is to punish. To restrict. When there is a problem, we take away the tool. We motivate through the negative. We incarcerate rather than rehabilitate.

And there are times when this is the exact course we should take!

But legalism does not solve the problem of good and evil. It just covers it up, so that no one can see it. Evil is still alive and well.

When God decided to save humanity He did not take sin away. Instead, He provided a new way to live. A way which promised better life. More joyous life. Not just for one person, but everyone that person encountered would be blessed.

In this way, we shall save our children. Not through rules – though we will have many rules. But by demonstrating a new way to live. A life found only in Christ. Through His Spirit guiding us, we will find the blessing…

…even the blessing of knowing that our Children are His.