“I pictured my pastor as a salesman or a magician, trying to trick the congregation into believing Jesus could make us new.” – Don Miller, Blue Like Jazz

As Christmas approaches I have become one of the relentless shoppers. Albeit one of those filling the crowded crowd-less internet. And everyday I watch the lightning deals on Amazon. This has resulted in me buying a few ridiculous items. My dad received a Charlie Brown Christmas Tree (which was then used for a sermon illustration). My family  received a boxes upon boxes of tissues at a low price. But beyond that there has not been anything too exciting. I do not have the devotion to get anything that is really wonderful and cheap. I alway find those deals sold out. 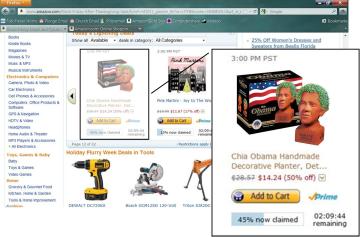 Yet I keep watching – which must say something about my valuable time… and last night I hit the jack-pot: an Obama Chia Pet… Seriously, I am kidding. Instead, I was left wondering who would want such a gift? At first glance it seems offensive (imagine the “hair” growing). So what Democrate would enjoy the gift? And yet I can not imagine Republicans lining up to pay for even the deal price of $14.24.

Of course 45% were already claimed when I made my discovery, so maybe I just do not understand this world?

But this is where my problem begins. In my highly skilled profession we set out to convince people of the gospel. Then we are left wondering why no one seems to hear what was spoken. Amen’s and head nods aside, following a sermon, we head home in the same ruts – unchanged.

Logically this seems ridiculous. Christians should live as Christ does – myself included. But in a Chia Pet Society – well, logic is left out of reality. We do things unexplainable. From materialism to racism (and Obama Chia may be a two for one deal! thanks Amazon!). So what is there to do?

Join me in prayer for this Christmas and New Year. That God will plant seeds of truth.