“There’s no crying in baseball.” Tom Hanks in A League of Their Own 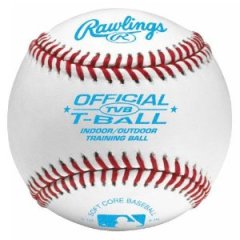 Of course crying in t-ball is another matter altogether. At Ivy’s first practice the coach lined up the girls to play catch. Each little pair of girls was given a t-ball baseball (rubber core, but still hard) and then the throws began. Soon enough someone was hit in the head. Of course not by her partner, since the girls could only aim in general directions… so now the tears were following.

And the tears do not stop. Sand is in someone’s shoe. Another person is hit with a ball. Some tears do not have explanations… I doubt Tom Hank’s character could have ever recovered from alcoholism is this environment.

Yet, there is something else going on. In between aligator catching ground balls little girls are dancing in line. Laughing and telling the coaches every detail of their day. Calling out to parent’s after making a catch. (At least Ivy was doing all these things!)  In many ways it is pure chaos. And yet in another it is life to the full. To the edge with every emotion. More joy (and sadness) in a few moments than I have felt all day.

“The core belief from which we operate is that a better future can be accomplished by better problem solving…. Talk radio and TV are visible barometers of our attachment to giving primacy to problems.” Community by Peter Block

In the coming years these girls will become softball players. The emotions will take a back seat to focus and determination. Their dance sessions will become increasingly rare… until one day no one is dancing. That day their faces will be dry of tears. But the day when there is no crying – will there still be unconstrained joy?

In everything we set goals. Goals we build around correcting problems. So we work to eliminate the faults. The little girls are not catching or hitting or… even tying their shoes! … What is preventing them from learning to play (what is the problem)? The tears are a problem. As is the dancing in line. The girls need to toughen up. They need to focus. This game is serious. And the girls need to become serious too…

But what if we did not focus on problems? Instead, what if we focused on strengths? What if we worked to increase the good points? These girls are playing a game with joy. How can we increase their joy? … Learning to play makes it more joyous – so we would continue to teach. But maybe we would let them keep dancing…

In the church I have a list of our problems. Things I am working on to correct. Issues to solve. But I wonder, when all the problems are solved will Chandler have lost something wonderful in the process?

One thought on “Crying…”