This story is a few weeks old, but I just stumbled onto it. I doubt either of us care about the Flat Earth views of any athletes (maybe this is all a gag for attention or a push against fake new). But it caused me to research the idea of a flat world. Of course the web is full of theories and conspiracy theories – the Flat Earth Society still exists.

I am amazed at what people will believe (Flat Earthers believe that not only is gravity a farce, but everything from Apollo to SpaceX have been faked) and we exist in a world of endless information – misinformation – so we are able to believe literally anything. We don’t have to change our minds – just our source.

Throughout my education there was a talk of the post-modern transition. The modern worldview held up logic and reason – knowledge, science, could solve the world’s problems. The Modern Era, rising with the Reformation and Enlightenment, began to set following the World Wars (far from fixing the world, our inventive brilliance brought us closer to annihilation).

During my seminary days the Post Modern World was just alive on the fringes. In intellectual circles there was an awareness the world was moving away from society truth, toward personal truth. For instance, on the scriptures, NT Wright wrote “There will be no ‘right’ or ‘wrong’ reading; only my reading and your reading.” (The New Testament and the People of God, 59). I had many concerns for what this could mean in the church (and also celebration, as I saw the rise of Paul’s Priesthood of the Believer). But I am not sure I could fathom how it would effect the whole of society.

We are now watching unfold a world without knowledge. Without logic. Without reason. 1 We behold a society where knowledge and logic are personal perspectives. The world is bound only by the reason of self. In that same passage Wright continues, “We live in a relativist and pluralistic age, an age which place self-fulfillment above the integration of self with other selfs.”

In a world without overarching logic, how do we change minds? How do we change lives? We can not debate truth –  everyone holds the truth. This is no longer a boxing match of ideas. We can not come swinging  with arguments and expect change. Everyone simply goes back to their corners — to places where their ideas are safe.

I was touched by Jimmy Kimmel’s monologue. It builds from his life story and connects with our life story. It was relational more than logical. Yet, I doubt it changed many hearts. I was touched and I prayed for children in hospitals – because that is already my belief.

But the monologue mentioned what will change the world. In crisis Jimmy Kimmel reached out to every friend for help and prayer. As a joke he said, “We had atheists praying for us!”

Deep relationship. Deep love. This will change everything. Not to say that these atheists suddenly started to believe in God. I am sure they did not. Because of love they were open to the idea, rather than shut.

Loving relationships will open up our world to change.

But for that to happen we must truly love our neighbor.

The second is this: ‘Love your neighbor as yourself.’ There is no commandment greater than these. (Mark 12:31)

Onto the Random: As I child I loved Calvin and Hobbes. The dad would often tell Calvin ridiculous untruths about the world (see below). I thought how wonderful it would be to have children and explain the world with “the Moon is made of cheese” flair. But now with four children… well, I still tell stories, but I try to correct the science… most of the time. 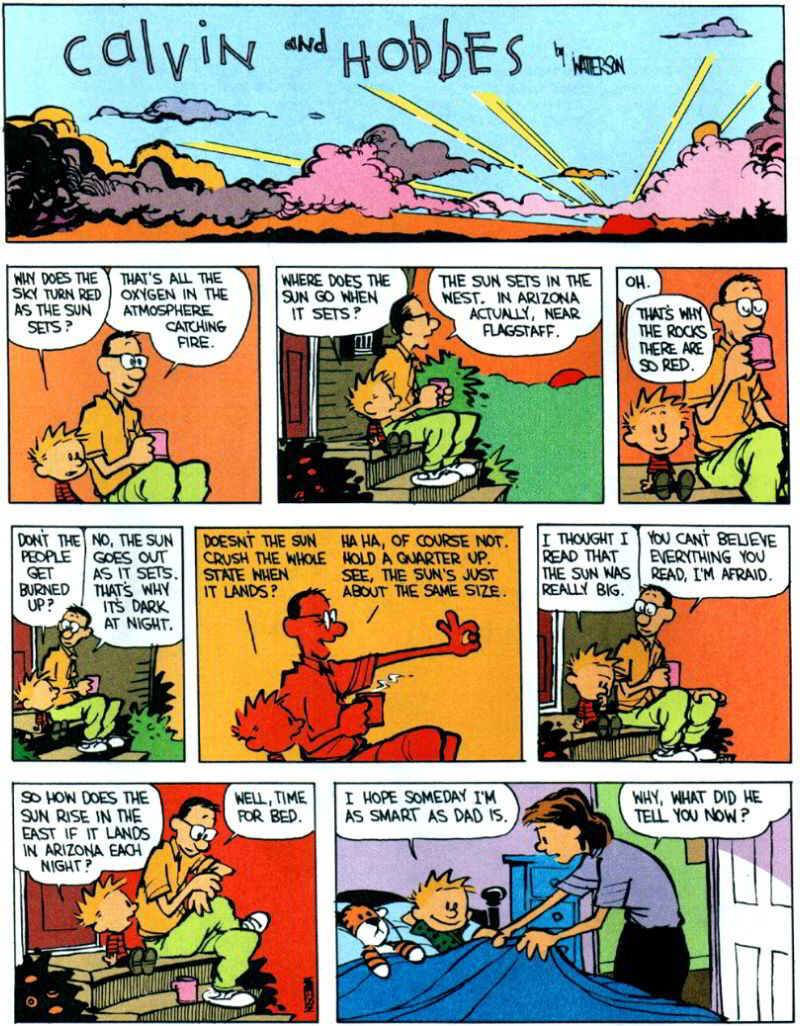